Last weekend had a plethora of esports events from the end of the Summer Split in League of Legends, the return of the Overwatch League, Last Chance Qualifiers for Valorant, FNCS Chapter 3 Season 3 in Fortnite, the Rocket League World Championship, a $100,000 Twitch Rivals tournament in Rust, and so much more. We’ll recap the 5 biggest winners and 5 biggest losers from the weekend. Buckle up, because it’s going to be a wild ride! 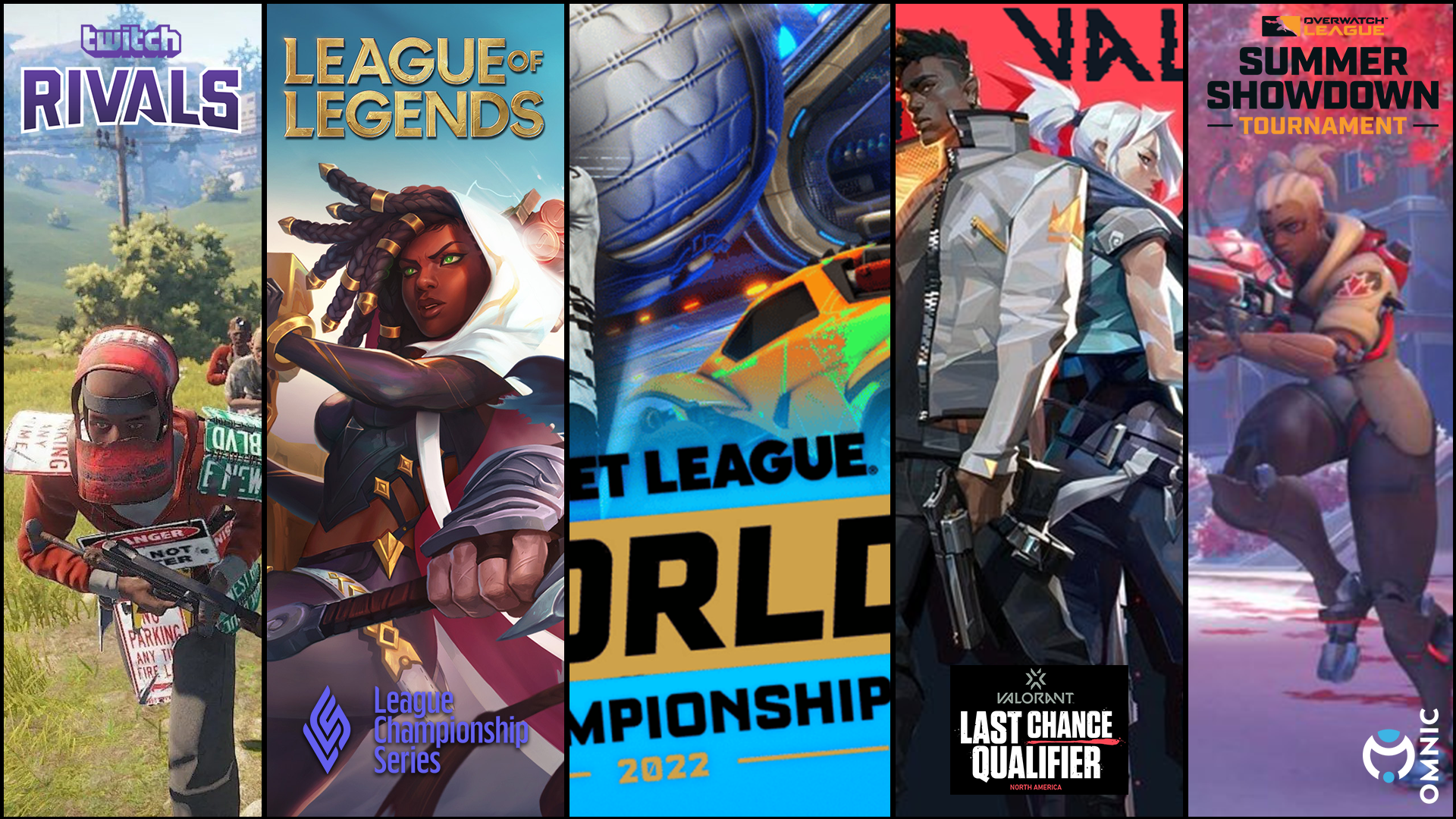 Edward Gaming became the first Chinese team to qualify for Valorant Champions and attend an international LAN event. EDG burst onto the East Asia Last Chance Qualifier (LCQ) scene, not dropping a match or even a map to secure their spot in Istanbul. Despite China not having its own VCT circuit, EDG blew its opponents out of the water with a mix of aggressive plays backed by solid fundamentals.

While EDG’s Valorant fans will have to wait until September for Champions to start, a win last Wednesday over Anyone’s Legend locked EDG’s League of Legends team in 5th place going into the Summer Split playoffs. Fans can tune in this Thursday as the reigning world champions take on FPX.

Unfortunately, the dream of Champions died for The Guard in a loss to 100 Thieves. The VCT Stage 1 Winners had a great run in the upper bracket, only dropping one map until the finals, where they were swept 3-0. With only third-party tournaments left for the year until franchising, The Guard fans will have to wait quite a while to see their team against the toughest competition.

Unfortunately, their sister team the LA Gladiators had a similarly rough week. After winning the Midseason Madness Tournament, the Gladiators returned to regular season play dropping two 2-3 games to the Dallas Fuel and Houston Outlaws. They will hope to bounce back against the San Francisco Shock and Toronto Defiant next week.

Opposite The Guard, 100 Thieves earned a spot to Champions through the NA LCQ. After getting knocked into the lower bracket by Faze, the team would storm to finals through Sentinels, Cloud9, a Faze rematch, and end with a victory over The Guard to punch their ticket to Istanbul, only dropping a single map in the process. It helped that Derrek “Derrek” Ha won 16 clutches throughout their LCQ run. Fans will have to wait for September to see the squad in action again.

Those who don’t want to wait can catch 100 Thieves League of Legends teams as they head into playoffs for the Summer Split. After going 2-1 in the last week of the regular season, the team locked up second place in the standings behind Evil Geniuses. They start in the second round of the winner’s bracket, waiting for the winner of Team Liquid vs FlyQuest. Fans can tune in on August 27th to watch the reigning LCS Champions try to repeat.

A rough season for Dignitas’ League of Legends team came to a close last weekend as the team lost its last three games to end 3-15 for the split. The team had struggled throughout the split, but it was their last game that hit the hardest. Playing Golden Guardians, the team could force a tiebreaker game for playoffs if they won. Unfortunately, despite building a lead, Golden Guardians came back to crush Dignitas’ playoff dreams in a final fight over the Elder Dragon. It was especially painful losing at the hands of Golden Guardian’s most recent acquisition, Jungler Kim “River” Dong-woo, whom Dignitas had traded to Golden Guardians three weeks prior. Fans will have to wait till next year to see if Dignitas can bounce back from a rough year.

Team Liquid found success in both Riot-made games last weekend. The Team Liquid Valorant team won the EMEA LCQ, winning a finals revenge match against M3C. Although M3C squeaked out an overtime 2-1 in the upper bracket finals, Team Liquid beat G2 Esports in the lower bracket finals before winning the rematch with M3C 3-1. It helps when you have ScreaM going 91/60/12 KDA across the final four maps. They punch their ticket to Istanbul and will be back in action in September.

In League of Legends, Team Liquid ended the regular season with a 2-1 week to lock up third place in the standings and send them into the playoffs. Widely regarded as an NA superteam, they will be back in action this Saturday against FlyQuest to fight for the LCS Championship and secure one of NA’s three slots for Worlds.

Out of all the losers here, Vitality’s is perhaps the most unfortunate. The League of Legends team went into the last week of the regular season with a 94.6% chance to make the playoffs. Going against a 6-9 SK Gaming, 6-9 Fnatic, and 9-6 Rogue, the 9-6 Vitality, widely regarded as a European superteam initially, had to win a single match. They lost all three, forcing a tiebreaker game with Excel for the final playoff spot, which they also lost. Disappointed fans will have to wait for next year to see which direction the ex-superteam goes in.

In an FNCS that came down to the final moments of the final game, Cuhmmandment and Avery pulled off the win. It seemed like a lost cause, as Mero11 and Bugha entered the last game with a large 20-point lead with Cuhmmandment and Avery in second. As the last game started, Mero11 and Bugha fell early, creating an opportunity for catchup, but Avery was lost early as well. This led to Cuhmmandment being alone and alone he secured enough kills and position points to sneak into first place. With one last kill with 10 players remaining, Cuhmmandment gave his duo the lead by one point! It was a nail-biter epic victory for $180,000 in prize money.

Opposite Cuhmmandment and Avery, Mero11 and Bugha were on the losing side, missing the top spot by a single point. While they had entered the last game with a large lead and played cautiously, they were knocked out early. The players will have to wait for the next season for a chance at FNCS glory.

The Vancouver Titans picked up their first win this season as the Overwatch League returned. After picking up new head coach David “depi” Pei, the team showed signs of improvement last stage before heading into the Summer Showdown. After a close 2-3 loss to the Toronto Defiant, the Titans smashed the Paris Eternal 3-0 to get their first win of the season. Hopefully, the Titans can keep up their winning ways as they go against the New York Excelsior this Friday.

Four teams entered the Twitch Rivals $100,000 Rust tournament where only one could emerge victorious. Unfortunately for Team xQc, it wasn’t them. They fought hard over the course of the five-day tournament, avoiding elimination until the final day where they faced off against the other team left standing, Team DisguisedToast. Still, despite a $200k bet and intense effort, the points at the end of the day were a blowout as Team xQc posted 245 to Team DisguisedToast’s 518. The streamer will hopefully go again in the future if another Rust tournament occurs.

BDS celebrated winning the Rocket League World Championship over the weekend. A dominant European force, the team is the undisputed best team in the world with a 4-1 win over G2 Esports. Despite bringing in a rookie this season with Enzo “Seikoo” Grondein and the related growing pains, the team overcame a variety of challenges to raise the trophy in Texas, with Seikoo being named the overall MVP for the event. BDS fans have a lot to celebrate with this victory - just don’t ask them how their League team is doing.

The past month has been an exciting time for esports fans across the globe as the Overwatch League Grand Finals and League of Legends World Championships were held the first weekend of November. ...

Today kicks off the first open qualifier where 256 aspiring Valorant teams are competing to earn a spot in Challengers and hopefully earn a franchised spot in the international leagues. But an as...