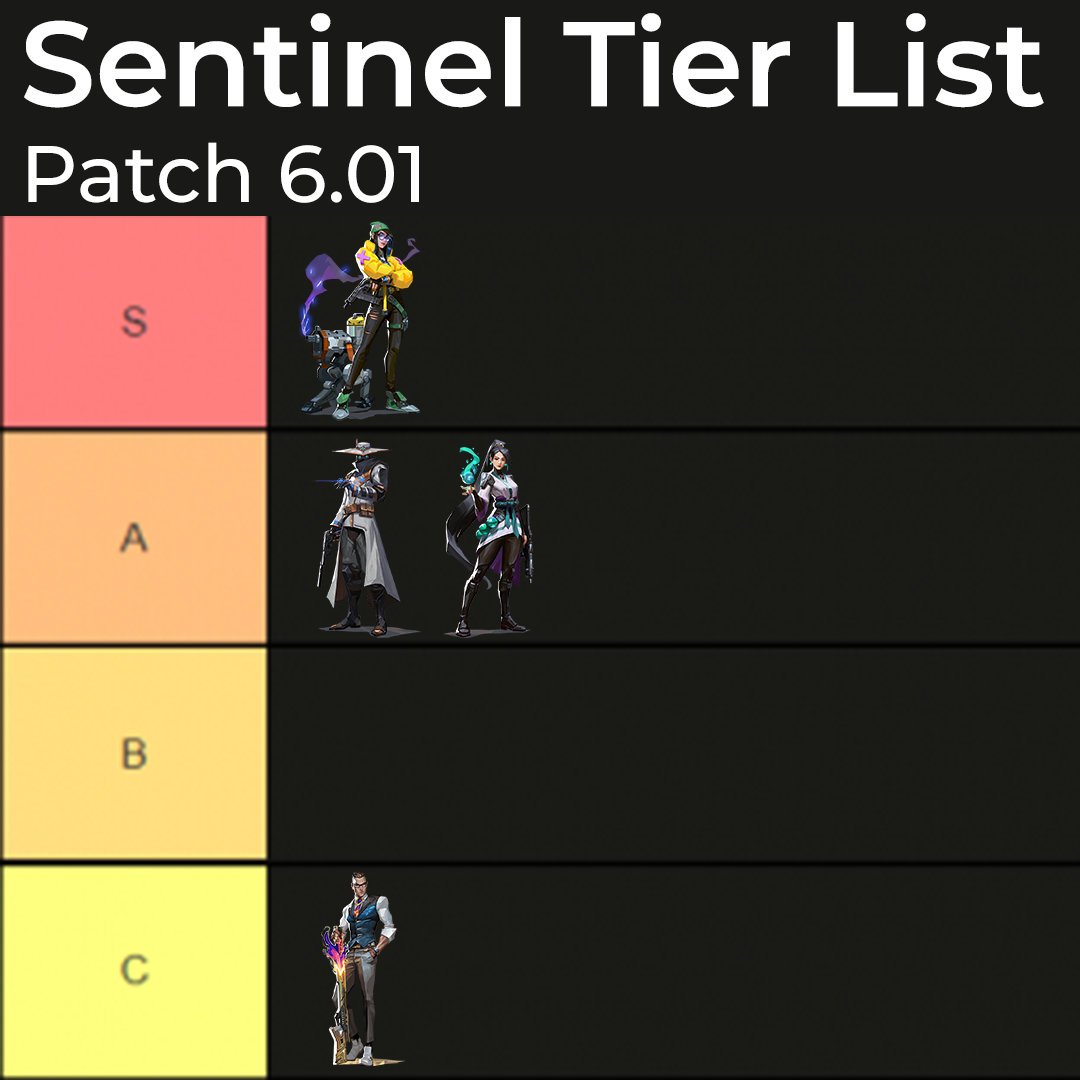 With Challengers LCQ wrapped up and São Paulo right around the corner, professional Valorant is returning after an exciting offseason. For the less-professional Valorant player, Season 6 brings with it a new opportunity to climb the ranks and finally reach the rank of your dreams.

For my fellow Sentinel mains out there, Patch 5.12 brought a huge shakeup with Chamber’s rework and scaling up utility health while decreasing utility damage. Along with the removal of Breeze and Bind and the addition of Lotus into the competitive rotation, the Sentinel meta has drastically changed.

S - Near must pick, offers a clear advantage over the others

A - Very good pick that still offers a lot

B - Okay pick that can work in some situations

Changes - The rework has dethroned the golden king. The teleporter rework forces him to play more conservatively while a variety of other nerfs weaken his Headhunter, Trademark, and Tour de Force. Trademark now has an activation range, just like Killjoy’s turret, and coupled with the short-range teleport anchor, it forces him to play on a single site or area, greatly reducing his previous power to roam.

Strengths - Chamber is still very good at getting economic value for players with good aim, as his Headhunter is still a one-shot headshot at 150 creds a bullet and Tour de Force is essentially a free Operator. His teleporter is still a way to freely peek open areas with an easy out, although the shorter range and long cooldown forces players to position more strategically.

Weaknesses - Chamber cannot lock down a site or deny entry as effectively as the other sentinels. The limited range of Trademark and Rendevous force him to play in a single area, but if pushed with utility, he struggles to find value. His utility revolves around the player hitting their shots, meaning effective smokes or flashes easily pushes him back.

Overall - Chamber will struggle to find a spot. He remains a good option for players with good aim that want to peek angles but lacks the utility to effectively hold his ground, turning him into a glass cannon. With the lowest win rate of any sentinel this act across most ranks, try to avoid the French weapon designer in favor of the others on this list.

Changes - Sage saw two changes in 5.12, the first a minor delay in her wall being created and the second a rework of her heal to make her more team-oriented. Rather than doing a flat 60 HP, the heal now restores allies to full while only restoring 30 HP to herself. This encourages players to stay with and heal teammates, rather than trying to go off on their own.

Strengths - Sage’s wall is still the best single ability that isn’t an ultimate to physically block off a choke point. Her heal is now even better at keeping allies in the fight, especially useful in pistol rounds, and her slow orbs are excellent at delaying pushes.

Weaknesses - Sage’s utility is less useful for entering a site. Where Cypher and Killjoy can use their camera and turret respectively to check corners or smokes, Sage cannot and has to rely on teammates’ utility or peek. Similarly, while she has her wall, she can’t watch multiple flanks or chokepoints for the extended period of time a turret or trip wire can.

Overall - Sage remains a solid pick that compliments most team compositions. On some maps, like Icebox, her wall remains one of the most powerful abilities while her new heal makes her more helpful to her team, despite being unable to watch multiple flanks. With a win rate usually hovering around 50%, Sage players should feel good this season, but if you want to try something a little more powerful, read on.

Changes - Cypher was mostly untouched by 5.12, the only change being an increase in tripwire health up to 20 HP.

Strengths - With few changes, Cypher remains the best sentinel at spotting enemies. With the Chamber rework, he is the only sentinel with global utility (unless you want to count Sage’s wall staying up). His camera can be accessed anywhere on the map while his tripwires can cover any flank. Cyber cages are great on-hand smokes or useful in setups to hold down a site. With only a 6-orb ultimate, he can frequently reveal enemies to help his team secure rounds.

Weaknesses - Cypher gets information, but does little actual damage to enemies. Failure to communicate with their team reduces the value of information and if Cypher dies early, it exposes his team to flanks. In addition, while Cypher’s ultimate is cheap, it requires a kill and close access to the body, meaning it can be hard to get off.

Overall - Cypher is great at securing flanks and tracking where enemies are or aren’t. He offers more offensive information-gathering options than a Sage with his camera, but still excels when he can set up in an area. A solid pick to fill out any team comp, he only pales when compared to the current queen of the sentinels.

Changes - The utility damage reduction has benefited Killjoy the most out of all the sentinels. Not only is less damage done to her turret and alarm bot by utility, but her Lockdown was increased to 200 health. This increase prevents it from being broken by Breach’s Aftershock and requires a direct hit from KAY/O’s molly to fully break it.

Strengths - Killjoy has always been good at locking down a site and the 5.12 patch just makes her better at that. An alarm bot vulnerable plus nano swarm damage can chunk enemies down while her turret can be a nuisance to clear, especially in eco or half-buy rounds. Even on attack, she excels at covering flanks and can check corners or smokes with her turret. Her ultimate lives up to its name and successfully clears a site for 15 seconds. On attack, that is a third of the time the spike needs to detonate while on defense it is plenty of time to defuse.

Weaknesses - Like Cypher, Killjoy is at her best when she can set up and be pushed on the site she sets up. This means she can struggle having to rotate, although the ability to recall her bots makes it doable. Her limited activation range also comes into effect, especially if trying to cover long flanks, and her ultimate can be destroyed if not safely positioned. Lastly, her bots rely on contact to activate, meaning it is harder to determine if the enemy commits down a flank being covered or has turned around.

Overall - Killjoy is currently the best sentinel due to the buff to Lockdown and the rework of utility damage. She can hold a site like no other and the removal of Breeze, arguably her weakest map, has bumped her up in priority. With a healthy win rate, Killjoy mains rejoice in this time of great feasting while other sentinel players may want to pick up the German wonder girl to climb the ranks.

Thoughts? Disagree? Leave a comment down below and don’t forget to check back later for the rest of the roles.

Today kicks off the first open qualifier where 256 aspiring Valorant teams are competing to earn a spot in Challengers and hopefully earn a franchised spot in the international leagues. But an as...